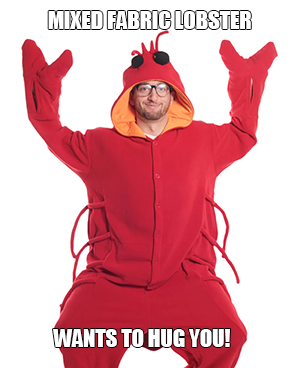 Published by BlackCalvinist on July 1, 2022

“What about shellfish and mixed clothing ? Funny how you stop believing your bible there! “

Raise your hand if you’ve heard that any time in the past 10-15 years since we’ve been talking about all things LGBTQ+.

There are several different articles that have addressed it in detail and are easily found on the net. The information isn’t hiding under a rock somewhere and it’s not anything ‘new’ that wasn’t addressed in the book of Acts. There’s even a random video by Lutheran Satire that touches the topic. We’re at the point of being intellectually lazy now if we pretend no one has addressed this.

If you’re unfamiliar with the argument here it is:
– Christians pick and choose what they want to believe because
– passages in the OT about mixed clothing, shellfish, pork and other things are ignored
– passages on homosexuality (especially Leviticus) are always quoted
– therefore, the Christian’s real problem is not that the Bible condemns homosexuality, but you’re a bigot.
– nani nani boo boo

For the sake of adding one more article to the pile on this topic:

Christians read the entire Bible, not just one passage or one book.

When early Christians (first through eighth centuries) looked at the 613 commandments in the OT, we recognized that some of them, pertaining to the ceremonial law, were fulfilled in Christ. Some were civil – they involved things which were applicable to national/ethnic Israel and were no longer applicable to the church because the church was composed of people from “every tribe, tongue and nation” (Rev. 7:9). Others were moral – they stayed in force even in the New Testament and were repeated (e.g. Matthew 5).

So Christians read the entire Bible, not just one passage. We keep going with the rest of the story and not just stuff in the Old Testament.

Civic laws are those things which, when you read them, you can see that they apply specifically to ethnic/national Israel as a nation. That nation ceased to exist as of 586 BC because God dissolved that nation via invasion from the Babylonians (give 2 Kings and/or 2 Chronicles a read on this topic). Babylon was taken over by Medo-Persia, who was then conquered by the Greeks, who were then conquered by the Romans.

At most, the Jews had been a vassal state under Rome (and every other power over them) post-586 BC. Even though conquered, thanks to Cyrus, the Jews were granted a little more freedom to maintain their identity, parts of their land and even rebuild the Temple (which was destroyed by Nebuchadnezzar II in 586). Make no mistake – they were still occupied, but were able to maintain some independence and be ‘left alone’ thanks to the sheer size of the empires around them. Persecution (e.g. Antiochus IV Ephiphanes, for example) was usually from local officials who hated the Jews; the rest were mostly indifferent to the Jews as long as they didn’t “cause trouble”. Whereas in the Old Testament there were procedures for stoning people, in the New Testament when the religious leaders wanted to stone Jesus publicly, they had to appeal to the local authorities (John 18:31). Stoning was a civic function of the law (though there was a moral component always linked to it). For example, the death penalty for murder (Genesis 9:5-6) predates Sinai (Exodus 20:13, 21:12).

At this point it becomes a matter of reading. Is the law that was given in the Old Testament something that is repeated in the New Testament as binding on Christians?

When it comes to ceremonial laws, these all had to do with how sacrifices were to be prepared. The entire book of Hebrews and Colossians 2:11-23. (and Galatians and multiple other passages in the New Testament) all collectively teach that the Old Testament sacrifices and all of the laws concerning those ceremonies were fulfilled in Christ and with his sacrifice (Hebrews 10:10).

Thus, we don’t have to wear certain garments , we don’t worship in a temple, we don’t have clean/unclean distinctions anymore (Mark 7:19). For all varieties of sexual immorality, instead of stoning people to death, we excommunicate (1 Cor. 5:1-13). This does not mean that the death penalty has been abolished. Rather, the power of life and death has been delegated to the state (wasn’t it always ?) in Romans 13:1-7. This does not mean that everything the state deems worthy of death actually is. Paul didn’t have an issue with dying if he’d done something worthy of death (Acts 25:11). Forced emperor worship, for example, was rejected by Christians on penalty of death (e.g. Polycarp).

This brings us to the third category, moral. Moral laws are based on the character of God. God is the only God, so idolatry is a rejection of Him. God is invisible and His glory cannot be looked upon in full by human eyes, so making images, idols, imaginings and using them as proxies for worship is dishonoring to Him. His name itself (יהוה) is a representation of His glory, His character and Person and must be treated as holy and sacred (Moses sees a portion of God’s glory in Exodus 34:6-7 and his response bears this out). God Himself is the definition of truth, so lying to or about your neighbor is a rejection of truth. Covetousness, which is envy and idolatry, demonstrates a lack of trust in God to provide your needs and thankfulness to Him for what He has given.

With all of that said…. Jesus said:

Literally, two birds with one stone. All foods declared clean, and all porneia declared evil.

In the future, understand that cherry-picking one or two passages from scripture (usually to try and silence Christians) and thinking that they contradict each other is the equivalent of only watching part of Captain America: Civil War and then jumping to Endgame and saying “these movies contradict each other!”

If you’re a Christian reading this, have confidence in the Word of God. There have been millions of skeptics over the years. Brilliant men (intellectually) have declared repeatedly that they would be the ones to see Christianity die off in their lifetime. All of them are now dead. Jesus is alive. The church is alive and flourishing.